I grew up in Flyinge with parents without horse background and started riding at my grandmother’s sister at an early age.

On my horse farm outside Flyinge I manage and operate my business. There I train horses and give dressage lessons, and breeding on a small scale.

For me it’s important to have a close relationship with my horses. The horse is my competition partner, where trust and confidence plays an important role. My winning formula for achieving success is to proceed slowly and give each horse the time it needs to develop.

I bought my international competition partner Di Lapponia T from a breeder in Germany when she was two years old. I have ridden in and trained her to international Grand Prix dressage, the highest difficulty level. No one besides me has ridden her, which I think is unique at elite level. Di Lapponia T has great potential and with a heart of gold is predicted a brilliant future.

Swedish Equestrian Federation’s first ”Jubilee Scholarship” of SEK 100 000 was awarded Paulinda. The scholarship was awarded at a ceremony at the Royal Mews in Stockholm, 19 December 2013 in the presence of H.R.H Princess Madeleine. Equestrian Jubilee Foundation was formed in connection with the Swedish Equestrian Federation’s centennial in 2012 to provide Swedish equestrian a force to belong in the world elite in the future.

After high rankings and scores during the World Cup season 2014-2015 Paulinda qualified for the finals (2015 FEI World Cup Dressage Final, Las Vegas, USA). In the finals the score was 72.686% in the Grand Prix (GP) and seasonal best.

The Swedish Olympic Committee gathered in the fall of 2015 all the prospective Olympic Team members to the Olympic camp about a year before the Olympic Games in Rio, more than 200 people participated. Paulinda, belonging dressage team’s elite group, participated in the training camp, which was at Playitas Resort in Fuerteventura, Canary Islands.

Paulinda was awarded ”Lundapokalen 2015” by the Culture and Leisure Committee in Lund municipality. The reasons were as follows: ”Paulinda made a brilliant achievement in 2015, by qualifying for and riding the World Cup Final in Las Vegas. Paulinda does everything herself. She has ridden in and trained her horse, taken care of the horse on her own and does all other work herself, which is a unique achievement at the elite level. Paulinda is well positioned to qualify for the Olympics in Rio in 2016.” 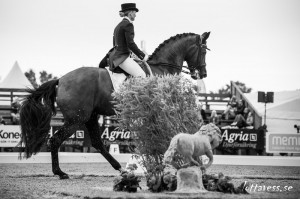 There are currently four horses in the stable. Main horse is Di Lapponia T, competiton partner and Grand Prix horse. See pictures and info about the horses (in Swedish). 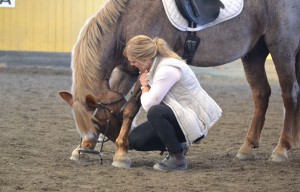 A clinic may be two and half hour long with a break, with audience in the riding arena where riders on horses rides in front of Paulinda and the audience. Themes can range from mental training, targeting competitions to training young horses to Grand Prix. The audience actively participate by asking questions and there is the opportunity for an open discussion between Paulinda, riders and the audience.

Paulinda gives lessons in dressage. Courses and training are agreed upon according to time permits and consultation. In addition to holding lectures at her horse farm, Paulinda regularly travels to Stockholm and Skara to hold training sessions.

Contact Paulinda to schedule a clinic or to become a student.

More about Paulinda’s sponsors/partners (in Swedish). Contact Paulinda to become a sponsor and get exposure for your business and brand.